We had to swing by Notre Dame and the Louvre on our way out of town; mostly for Thatcher’s sake! I had no idea Paris was such a big deal for him! He was so sad to leave so much left undone, which is rare, so I guess we’ll just have to come back one day!

Now we’re back in Dordogne wrapping up our last week in France and preparing for Spain next week! 💃 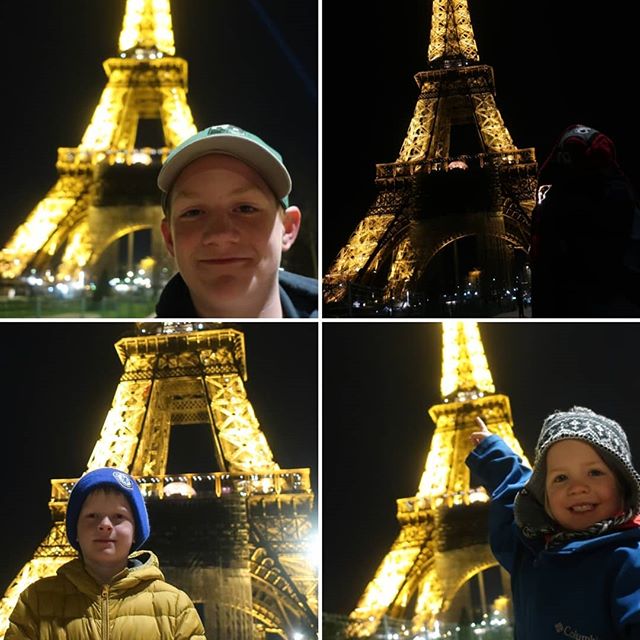 The Arc de Triomphe.
A beautiful sight!
Napoleon’s big win!
Paris icon!
Also an epic civil engineering disaster which should invoke fear and panic in the hearts of every visitor driving through Paris for the first time.
WHERE. ARE. THE. LANES. PEOPLE??! It’s a 4-8 lane (somewhere in that vicinity, I couldn’t tell) traffic circle free for all where buses have NO FEAR because they WIN. THEY WILL WIN EVERY TIME. I literally had a bus cross all 12 lanes of mayhem and threaten to T-bone us if I didn’t just yeild. And you just forge your way through that mess however you can without dying and pray for the best. Good heavens you guys, that was an adventure. I did get us through, alive, on only our second time around so 🏆. 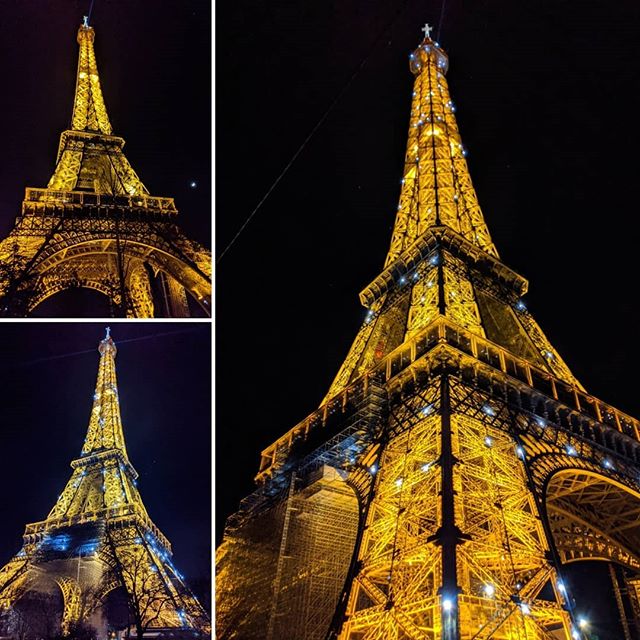 I’ll catch you up on our Grandpa Low tour after I’ve been able to share it with my family first, but even after a full weekend in Normandy we decided we couldn’t pass up a 3 hour detour on our way back to our house sit in Southern France to show our kids the Eiffel Tower for the first time!
It was dark and chilly but a beautiful, clear night when we got to our Airbnb literally right around the corner from the Eiffel Tower, so we got to see it all lit up. We weren’t even close to prepared for how excited our kids were to be there! They were actually ecstatic! They see cool, bucket list worthy stuff all the time but for some reason this one blew their little minds! They all commented on how it exceeded their expectations in its grandeur and impressiveness. They didn’t know that it sparkles every hour either, which started within a few minutes of arriving and it was so fun to watch their faces light up with that!
Their energy and excitement was so rewarding that when they all immediately asked if we could go to the top we didn’t even think. We jumped right in and bought tickets even though we hadn’t even considered it before. It was spontaneous and thrilling! We were some of the very last people to go up that night and we weren’t sure going up at night was ideal but it definitely was!! Not that I can compare it with a nice clear day up there, but it was so easy to spot the big icons in Paris as they were all lit up and stood out above the rest of the town at night. It. was. GORGEOUS. 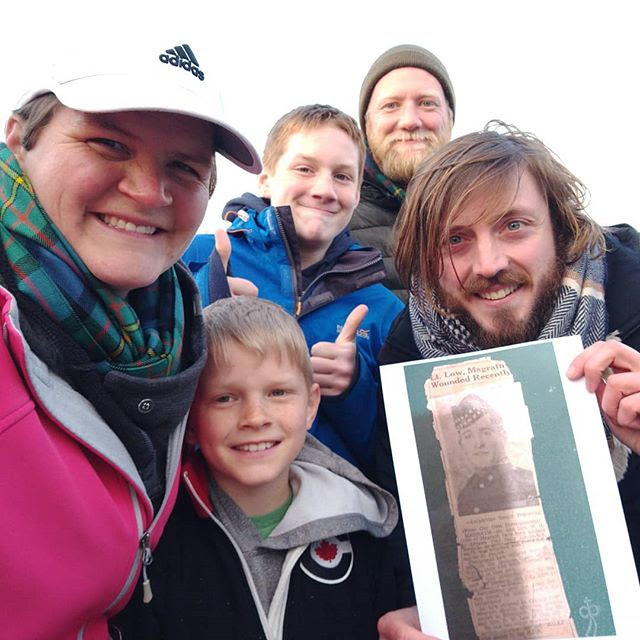 We’ve just had an unforgettable day retracing my Grandfather’s footsteps in the Battle of Normandy during WWII! Johann, the same guide Evan and the boys used last month, gathered all the information he could find about my grandfather in the French National Archives and put together a personalized tour of the sites specific to my Grandfather’s experiences. I’m still shaking guys, it was unbelievably special. I’m not going to be able to go in depth here for some time but I can’t resist sharing my excitement right now! Such a special day for our family 🥰
For the best tour guide ever: https://abnb.me/Z27vz3G0t4 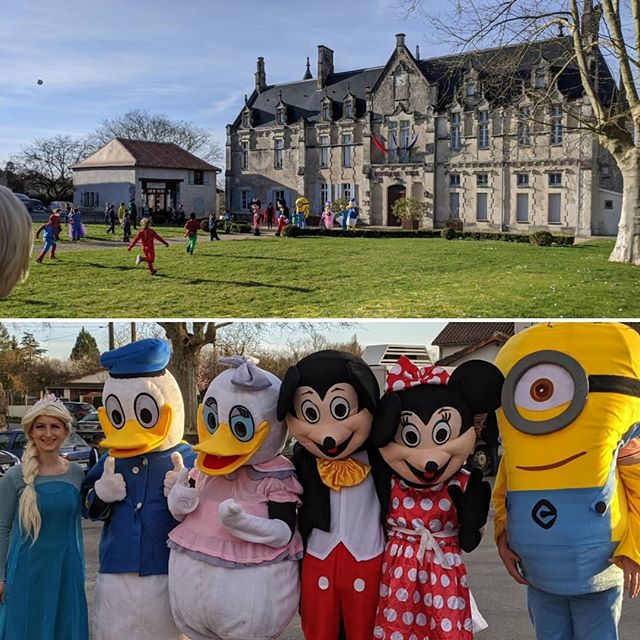 We got to take part in the Carnival festivities in the next town over the other day. We felt lost and confused and yet completely amused the entire time; everyone just seemed to know what to do! There was no announcements or directions being given but it was some of the best people watching fun we’ve had in a long time! Everyone gathered in the front yard of this gorgeous old hotel dressed up in costume. Nothing happened at first but the kids wasted no time running around and making up games. Levi and Finn figured out how to say “Can I play?” and “I don’t speak French!” and played soccer with a group of boys. Then Mickey, Minnie, Donald, Daisy and Elsa walked out of the hotel and handed bags of homemade confetti to all the kids. Spontaneous confetti wars broke out all over the yard! Then a group of majorettes walked up the street and everyone made their way over to watch, but suddenly they turned and marched away and everyone just… followed them. We were like… cool! So we just followed along, having no clue where we were going or what was happening. It turns out we were a parade! I think I saw maybe 8 people watching. They waved and we threw some confetti at them. The parade took a break at some sort of town square for the majorettes to do a dance, and then they just carried on winding through town until we got to a deserted parking lot with a barricade surrounding what I could only assume was a giant piñata shaped like a woman. The majorettes did a few dances, their teacher smoking like a chimney and dancing along off to the side; the Disney characters did a big countdown and then popped a few confetti canons, they caught the piñata on fire and everyone watched her burn. The burning of “Petassou” I later read, is a Carnival tradition in Durdogne. There were a few more dance numbers from the majorettes, their teacher spontaneously leading them on random marches around the parking lot and then just as suddenly as they appeared they turned and walked off down the street! Like, next to cars driving! We stood there, took it in for a moment, and then just laughed our way to the car, happy to have been privy to such a hilarious, precious small town celebration. 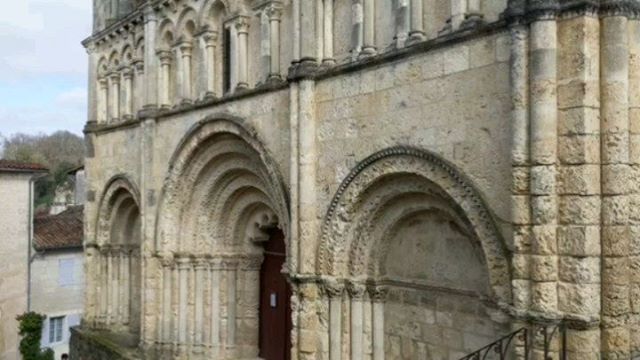 But the real stars of Aubeterre? I’ll let you be the judge. 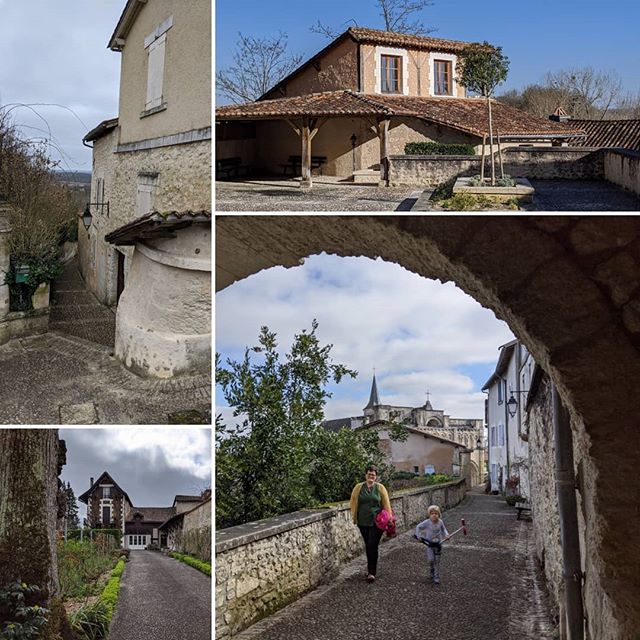 And as cool as the old church is, this town guys… It is just a dream! Something straight out of a fairy tale! 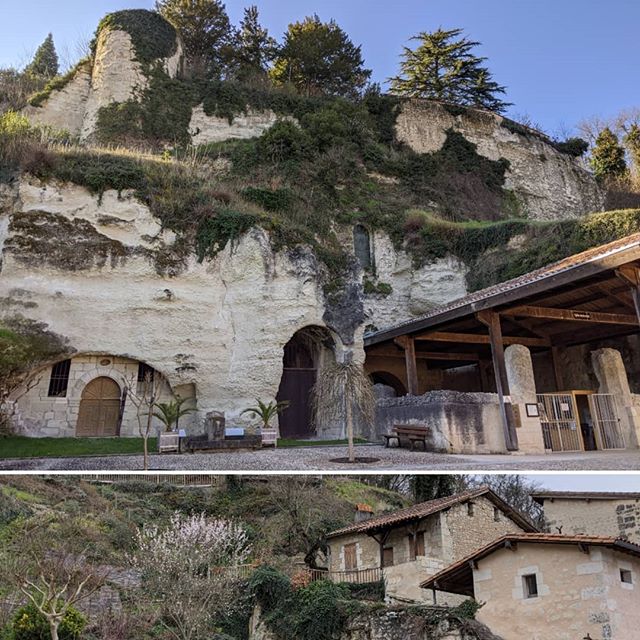 We were excited to go back to Aubeterre with the kids this weekend to check out the subterranean monolithic church of St Jean. It was crazy impressive! Built into the limestone cliffs overlooking the Dronne river in the 7th century, then expanded in the 12th century, only half of it remains. Rockslides and erosion destroyed the front chapel half; the back half of the church is what we got to see, where Christian relics possibly brought back with St Jean from the crusades to be displayed and preserved. Pilgrims passing through the area on their way to Spain would walk a specific path around the relics, praying for safety and protection for their onward journey. There were sarcophagi, secret tunnels, and a crypt. Worth a visit for sure! 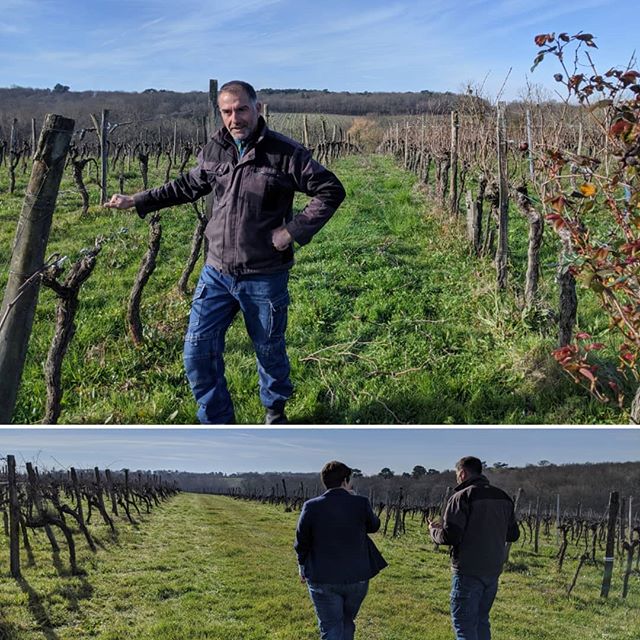 There’s no way to fully embrace the culture in Southern France without at least dipping into the world of Bordeaux wines. Wine is such an integral part of the culture and way of life around here and our sit literally borders wine country! Bordeaux, I’ve heard, is like the Mecca of wine lovers so Evan and I decided to dive in! We went to tour and taste at a small organic vineyard this weekend. It was such a rich experience!
Christophe, our guide, runs a small two-man operation growing, pruning and picking his 9 hectares by hand then producing, bottling and labeling right on site. We learned SO much; this is a whole new world to us so it was great to have a vintner to ourselves for a couple hours to show us the ropes!
The drive through Bordeaux wine country was swoon-worthy even in the winter; I can only imagine what it would be once the vines are full and the trees are green again.
We didn’t want our kids to miss out on all the rich French culture that morning so we stopped at a pâtisserie on our way back and brought another beautiful, essential piece of French culture home with us; a big box full of decadent pastries to thank them for giving us a morning to steal away and experience this side of France together!
À la joie de vivre! 🍷