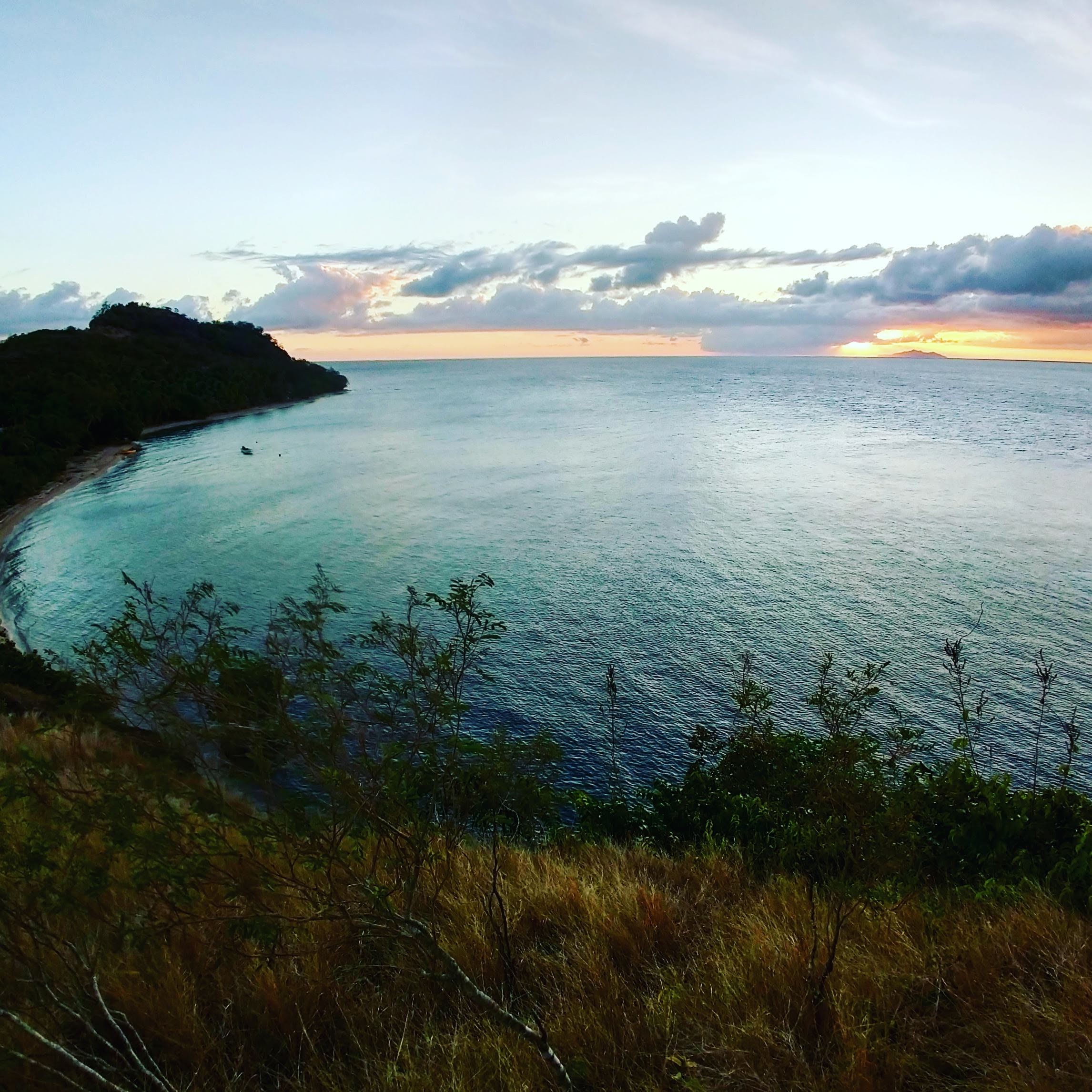 Living on an island for a week certainly included lots of time with the water and sand. Even getting there was a water adventure since we had to take a boat to get there, no roads! We were able to swim anytime, since we slept literally 10 steps from the sand.  The waves were pretty calm since the reef breaks most of the big waves further out. Watching the tide change was interesting, it was a very big difference in seeing the coral bottom all uncovered vs the waves coming right up to our hammocks. There was snorkeling equipment available to borrow and we were able go out multiple times. We even went out to a reef one day to snorkel that had much clearer water and more aquatic life! We did some fishing too. I will have to do better next time at catching more fish, but I at least caught one. I didn’t learn to spear fish, but that’s more my fault. I should have gone out with Api to harpoon some fish or set some traps/nets. He did this multiple times and he was really really good at it!

It was amazing to spend so much time on the beach. It was all ours too, there is even a place on the island called secret beach. It’s not that secret, just around the bend. But a great little walk and we found a lot of wildlife. Plenty of hermit crabs, but also baby birds, sea snakes, eels, fish, lobster, jellyfish, crabs, starfish, coral, etc. The kids had so much fun catching all the creepers they could: hermit crabs, and sand crabs mainly. Don’t worry, no coconut crabs. They did this for days on end! We also swam in the water, and it was sweet relief. While it was winter in Fiji and the locals were wearing jackets and were actually cold, we were still pretty warm. It was probably 70-80’s during the day and pretty humid. Mid-afternoon was usually a couple hours of oppressive feeling heat, but the water was a good remedy. Walking along one day I lifted a leaf and in under it was a pile of hermit crabs, I started my camera in time to see some of them scatter:

We were able to go out night fishing and it was great fun. Besides the fact that 2 of the boys fell asleep on the boat because it was, well, night. They had played all day in the sun though, and one was actually feeling pretty ill (dehydrated). The way to go night fishing in Fiji though involves a hook on a line wrapped around a plastic bottle. Any bottle will do, you use it as your reel and manually turn the bottle to let the line out or pull it in. Casting is as simple as throwing the bait on your hook out. If you’re fancy you can even swing it around your head and launch it, we tried and might have ended up hitting each other in the heads with our bait once or twice. And then you wait in the dark and feel the line between your fingers until you feel a nibble. Api was the best to be with on the boat, he would basically talk the fish onto his line! Really, he’d say, “here fishy fishy fishy, just the big ones!” and minutes later he’d pull one up. He spent most of his time untangling lines and cutting bait for everyone else, but he still caught 6 times more fish than the rest of the boat combined! 6 to 1. I caught the other fish, and it felt nice, but he was too small for anything other than cutting up for more bait. We had to watch out fishing because the hooks were getting stuck regularly on coral and things at the bottom. Our Swedish friend Max actually caught some coral rock!

Snorkeling was great and seeing the numerous fish. I won’t even try to name the kinds we saw (mostly because I don’t even know), but I can say we saw lots, including swarms of jellyfish, and a few sharks, plenty of coral, bright blue fish and some clown fish even. Thinking of all the varieties of life and considering the size of the ocean really puts our own size into perspective. We’re just small creatures too, finding our place in it all. There are so many fish in the ocean, and so much sand on the beach. It’s so great to be in it, and connect with it, and just take it in. Along those same lines, is another part of Fiji that I absolutely loved, the stars!

Being on a remote island with the only “civilization” light from town to our back over the jungle peaks, we saw more stars than I can ever remember seeing. We could sit at the beach and see billions of stars! I didn’t count them, but my kids told me there were that many. We could see the milk in the milky way! You’ll have to take our word for it, because the photos never turned out. The best was when there was no moon, because then we could see so many more stars. One night though we were out looking at the starts and could see Venus, Mars, Jupiter and Saturn all lined up across the sky along with the moon. It was magical. It continually made us think of simpler times when all people on earth shared the stars and formed their own belief systems about what the stars meant and their personal, yet small place in the cosmos.